Backyard putting greens aren't the only at-home activity that you can build with artificial grass! If you're looking for a family-friendly yard game that's great for being social and entertaining, keep reading! With the addition of a turf bocce ball court in your backyard, your home will be the place to be this summer.

What is Bocce Ball?

The game of bocce ball, also known as Italian lawn bowling, was invented in Italy. The word bocce comes from the Italian word “boccia” which means “to bowl”. This popular sport is played with eight colored balls and a smaller ball called the pallino. The game can be played between two teams or individually. Bocce ball is traditionally played on a court that measures 13 ft x 86 ft. The game is simple and can be played by people of all ages and skill levels! 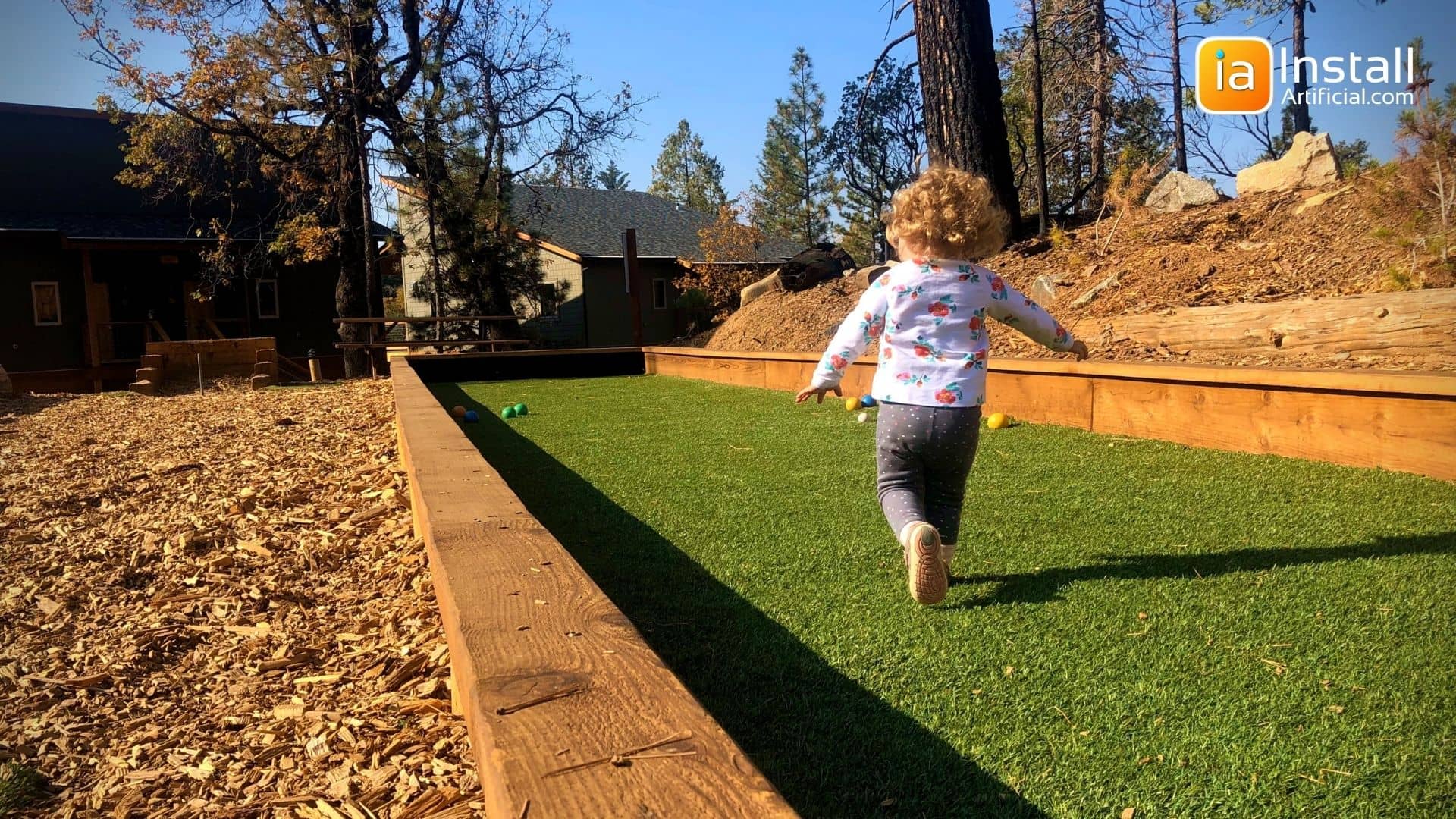 How to Play Bocce Ball

First of all, you'll need a bocce ball set consisting of

Once the court is set up and teams are divided, it's time to play. Each game of bocce ball consists of a series of rounds called "frames". Points are awarded at the end of each frame. The game starts with a coin toss. The winning team will elect a player to throw the pallino to set the target for the rest of the players.

1. Standing behind the line, the player will pitch the pallino to at least half-court. The same player will then throw one of the team's bocce balls. The goal here is to land as close to the pallino as possible.

2. Next, a player from the opposing team will throw one of their balls in an attempt to land closer to the pallino than their opponents. If they succeed, the starting team is up again. If they don't, they will continue throwing rotating between players. They'll keep throwing until either they run out of balls or they land closer to the pallino than the opposing team.

Keep in mind you can hit both the pallino and your opponent's balls when throwing. This can be a good strategy during gameplay to either push the opposing team's balls farther away from the pallino or move the pallino to be closer to your team's bocce balls.

Once a frame is completed, the team with the closest ball to the pallino will be awarded one or more points.  If both teams have a ball that's equal distance from the pallino then neither team wins points during this frame. (This is where the tape measure comes in.)

In most versions of the bocce ball's rules, if the winning team has a ball that's directly touching the pallino at the end of the frame they'll be awarded two points for this ball. The game continues in multiple frames until one team hits a predetermined amount of points. In a typical backyard bocce ball game, the winning score is 12 points.

Benefits of Using Turf for a Bocce Ball Court

While bocce ball can be played on a variety of surfaces, some provide more benefits than others. Dirt, natural grass, clay, and even oyster shells can all be used. While these are all decent options, artificial turf is the obvious choice for bocce ball courts for the following reasons:

Prior to breaking ground and getting your project started, you'll want to make sure you plan out the logistics to ensure it's smooth sailing. We'd recommend doing the following before moving on to building your backyard bocce ball court:

The standard size for an official bocce court is 86.2 feet long by 13.12 feet wide. If you plan to use the court in a professional setting or compete, then you'll need to adhere to this size. If you're building a court for kids, or if people are just using it recreationally, then a smaller size may work better for your space and be more inviting.

Determine your bocce ball court's size and location. Try to find an area that's mostly flat to save on leveling and prep costs. Measure multiple times and drive stakes into the ground to draft the playing area. Use turf paint or strings to ensure the border will be level and straight.

Decide on your edging material. The bocce ball court will need curbing to keep the balls within the court. This edging will need to be strong and durable to hold up when the balls hit it. Concrete will provide the toughest border but wood is more DIY friendly and is the most common bocce court edging in backyards. For this guide, we'll assume you're using treated wood.

Plan for your specific drainage needs. Because we're creating an enclosed space, it's essential to plan for drainage to ensure that water doesn't pool on the surface. Creating weep holes is an easy way to do this. We'd also recommend using artificial grass that provides advanced drainage. For the best drainage results, building a french drain beneath the bocce ball court will be necessary.

Lastly, you'll need to select the turf used for your court. Consider whether or not you want to use infill. Opting for padded artificial grass can eliminate the need for infill altogether. We'd recommend using nylon turf for bocce ball because it will hold up to gameplay over time.

The synthetic grass you choose can also affect how the game is played. Artificial grass with a short pile height will offer more rebound and absorb less energy. Something with a higher pile will offer less bounce and absorb more energy.

1. Excavate the Play Area. We'd recommend removing approximately 3-4 in. of soil along with any existing grass. It's important to make sure the area is level during this process. Treat the area with herbicide to prevent weed growth.

2. Build a french drain (optional but recommended). This will help reroute water from the surface to prevent pooling. Remember, the holes of the pipe for the drain must be pointing down towards the earth as opposed to upwards.

3. Lay 3" of evenly dispersed road base on the surface and compact heavily to keep the surface level, this will be your sub-base. It's important that the road base is put down prior to building the court edging because the road base will keep the frame secure.

4. Build and secure the frame. Cut the wood boards with a circular saw to the size of your court. Lay them with a leveler stacked two high and use deck screws to secure the ends of the boards together. Drive spikes into the wood every few ft. to nail the border into the road base. 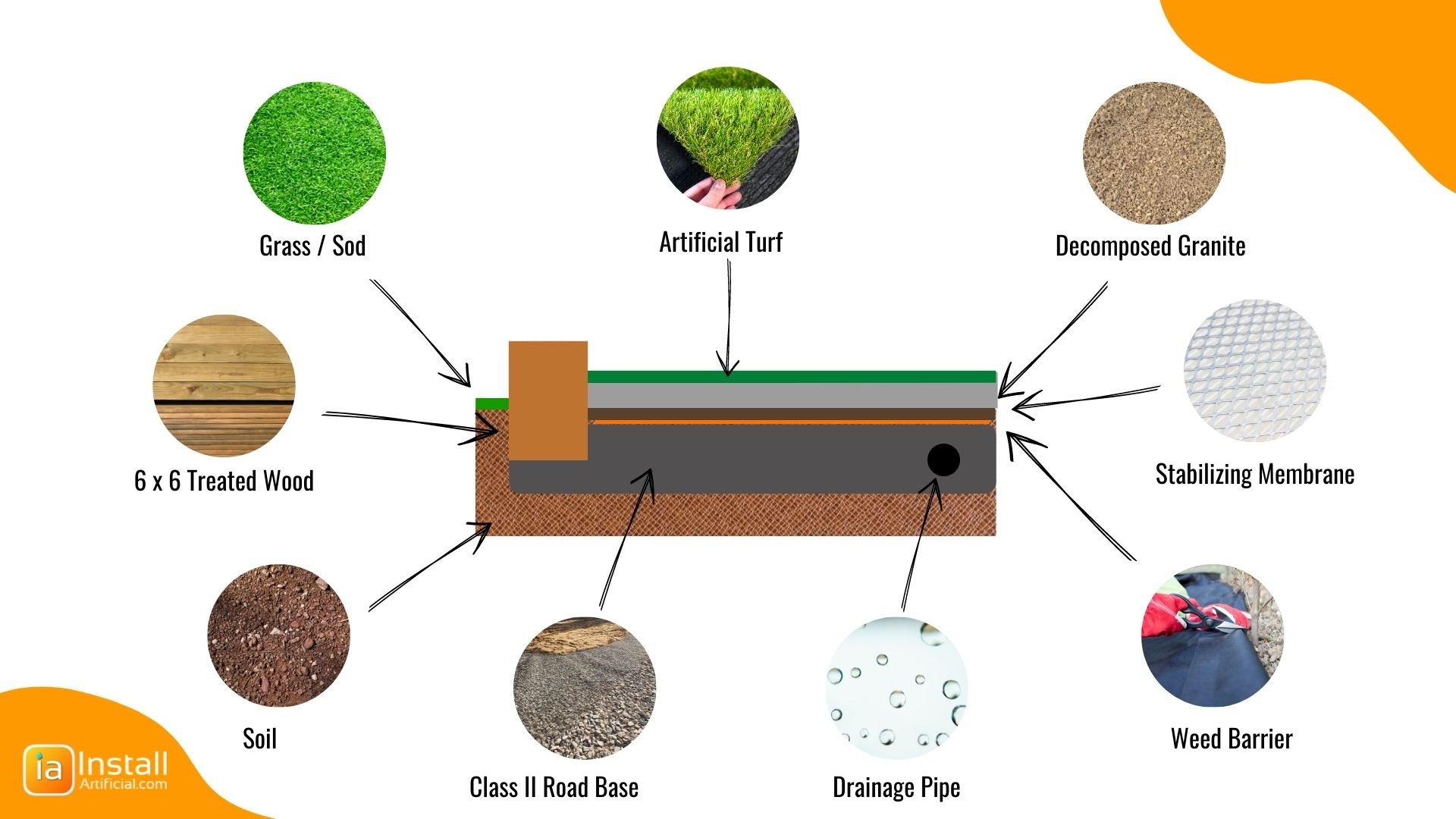 5. Lay a weed barrier (optional). In our experience, herbicides are enough to keep pesky weeds at bay. However, the weed barrier fabric can help stabilize the surface.

6. Next, we'd recommend adding a stabilizing geogrid membrane that's approx. 2" thick. This will keep the compacted road base stabilized over time during gameplay. Because the bocce balls are heavy, this membrane will provide you with an additional layer of protection against bumps and dents occurring when the ball is thrown.

7. You can also add a very thin layer of DG to the surface, no more than 1/8" this will penetrate the road base material filling the gaps making sure the top layer has very dense compaction. It will also help really smooth the surface.

8. Lay the synthetic turf and nail to the perimeter. Make sure you allow the grass to lay in the sun and you stretch the material as much as possible prior to nailing to prevent wrinkles from occurring.

The amazing thing about opting for artificial turf as your top layer of the court is that there is very little maintenance or upkeep required!  You can use a leaf blower to remove dust and debris.

If you're looking to DIY install your bocce court, check out our sports turf page to find the best grass materials for bocce courts! Direct shipping nationwide. Want us to handle the entire installation so you can sit back and relax? Request a custom estimate below! 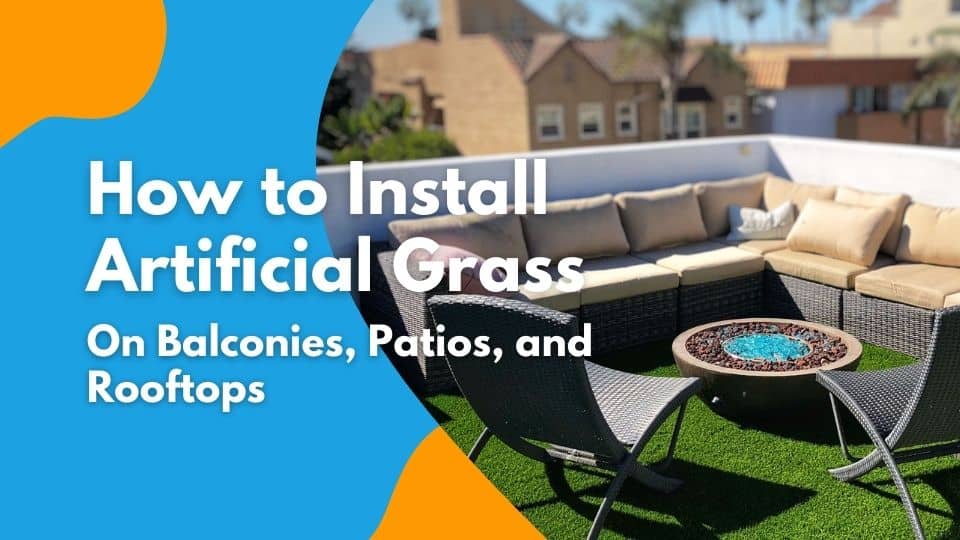 A complete guide on how to install artificial grass on balconies, patios, rooftop decks, and other hard floor spaces. Determine if this is what you need. Learn about the...